The Breathe Clean Air Group is delighted to hear that plans for constructing the Davyhulme Incinerator are on hold. “This is very encouraging news”, said Pete Kilvert, Chairman of the group “and we wish to place on record our thanks to Trafford Council for continuing its dialogue with the Peel Group and all Councillors who have supported our campaign on behalf of the community. This is a great day for Trafford and Greater Manchester.”

Local campaigners the Breathe Clean Air Group opposed the plan and elicited the support of Trafford Councillors. The Council unanimously rejected the planning application in November 2011, then a Public Inquiry held in November 2012 allowed the application, it was then approved by Secretary of Sate for Communities and Local Government Eric Pickles, and a High Court Appeal by Trafford Council in Feb 2014 failed to overturn the Public Inquiry decision.

The Breathe Clean Air Group has maintained that the incinerator would create air pollution that would have massive ill-health impacts. The design would not be using best available technology, the furnace temperature at 850 degrees C would be too low to destroy deadly dioxins, the out-dated bag filtration system would not be able to capture all the tiny Particulate Matter and heavy metals such as arsenic, and the chimney stack (at only 44 metres) would not be high enough to disperse the emissions effectively.

The incinerator, which was planned to be built near the M60 motorway bridge over the Manchester Ship Canal, would be located next to an Air Quality Management Area, where levels of nitrogen dioxide are already well above European safety levels. “There are several schools, sports facilities and many houses in the fall-out zone for this incinerator’s air pollution,” said Chairman Pete Kilvert. “We have campaigned to protect our children and residents for the right to breathe clean air. We are so pleased that our campaign looks to be coming to a satisfactory conclusion. However, the team remains vigilant and will also continue to campaign against a proposed fracking venture, motorway pollution, sewage smells and other air polluting processes in our neighbourhood.” 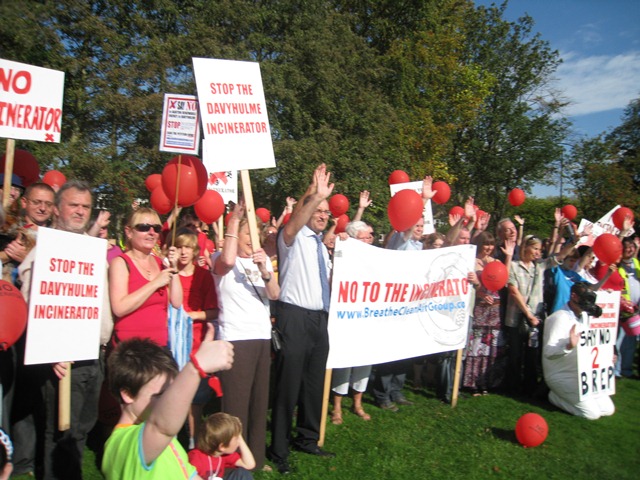