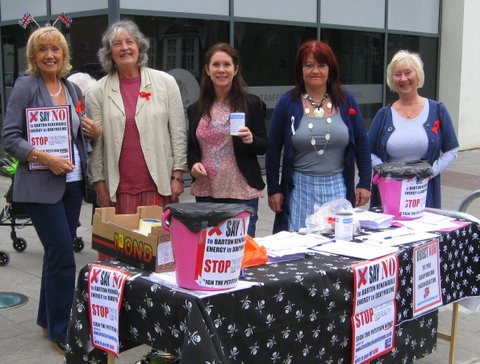 In an unprecedented move last Wednesday (27th June), Trafford Council passed a resolution asking Peel Energy to withdraw from its planning appeal and put a stop to building the Barton Renewable Energy Plant in Davyhulme.

This follows Trafford Planning Committee’s unanimous decision to reject the plant last November and also a poll conducted by the Messenger newspaper, where 93% of the people voted against it.

The motion was brought by the ruling Conservative group that said “This Council deplores the recent action of Peel Energy in appealing the decision of Trafford Council’s Planning Committee to refuse planning permission for a biomass incinerator in Davyhulme. This was a unanimous decision of the planning committee on the grounds of the perceived threat to the health of Trafford residents. The Council demands that Peel Energy reconsiders its decision to appeal the refusal and withdraws their appeal forthwith”.

Proposing the motion, Davyhulme East Councillor Lisa Cooke said, “I believe that Peel Energy should rethink their plans on the basis of sheer public outcry, in the spirit of working with the local community and not against the people”. Supporting the motion Timperley Councillor Jane Brophy said, “The Liberal Democrats fully endorse and support the motion and would like Peel Energy to withdraw forthwith”.

Trafford’s Labour Councillors supported the motion and proposed a friendly amendment: “Further, this Council resolves to investigate using its powers under the Sustainable Communities Act to petition the Government to change the planning system so that developers cannot appeal to central government to overturn a local planning decision”. Proposing the amendment, Urmston Labour Councillor Kevin Procter said “It is outrageous that Peel Energy has ignored the council’s decision and ultimately the wishes of the people in Trafford”.

Councillors highlighted the fears of their constituents and referred to the Air Quality Management Area, fine particulates and toxins generated by waste wood, and a short chimney stack that won’t be able to disperse toxic emissions adequately. They also paid tribute to the local campaign group, the Breathe Clean Air Group who were in attendance at the Council meeting.

The amended motion was carried unanimously.

Following the meeting, Breathe Clean Air Group Pete Kilvert said. “We are very grateful to all Trafford Councillors for their consistent opposition to the Davyhulme incinerator. The debate showed that Councillors have deep concerns and clear understanding that the incinerator will create serious health implications for generations to come”.

If the Council’s wishes are ignored by Peel Energy, it will defend its decision of last November at a Public Inquiry which is due to start on 13th November. The Breathe Clean Air Group has registered with the Appeal Inspector, to speak on behalf of the people of Trafford. This is known as being a Rule 6 Party.

“The Appeal process is very costly,” said Pete Kilvert, “as the Breathe Clean Air Group will be engaging the services of a Barrister. So we are launching an appeal for funds and asking the people of Trafford for donations. Please see www.BreatheCleanAirGroup.co.uk/donate on how you can help”.