The Breathe Clean Air Group have appeared in four recent news articles! Â The Messenger and Advertiser both reported on our Flashmob Freeze event and highlighted the March this weekend. Â The Messenger also reported on our recent ASA investigation, to which we have responded, basing our case on several independent academic articles. Â Finally, our Balloon Release made it into the Manchester Evening News ‘2010 -A Year in Pictures’. Â A great week for publicity! 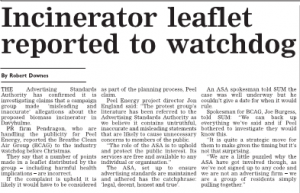