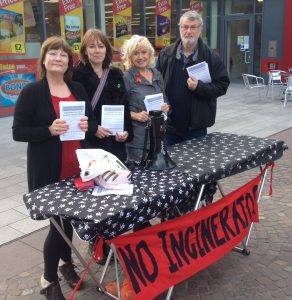 Members of the Breathe Clean Air Group were campaigning for clean air in Trafford at their street stall in Eden Square, Urmston, on Saturday. Many residents declared their anxiety over the recent proposals to introduce Fracking into Davyhulme alongside the proposed biomass waste incinerator.

“If gas is discovered in Davyhulme,” said Pete Kilvert, Chairman of the group, “the Government will insist that a full scale fracking venture will have to be established here whether we like it or not. And this is an area where air pollution is running rampant.”

The group has been campaigning for three years to stop the controversial Barton Renewable Energy Plant which will add dangerous air pollution to Trafford’s and Salford’s air. The additional pollution from Fracking on both sides of the Canal, along with the increasing motorway traffic pollution, will cause ill-health impacts to local residents.

“Children are particularly at risk” said Mr Kilvert, “as their lungs are still developing and their bodies don’t have fully developed immune systems to protect them. Anyone with a pre-existing health condition will be put at further risk and may die prematurely,” he added.

The Breathe Clean Air Group was visited by Trafford Mayor, Councillor Dillon Butt, who commented on Urmston’s community spirit wished the group well in their campaign.