On Saturday 26th May, members of BCAG were joined by councillors and others to support them in planting a Poplar Tree in Davyhulme Park.

“School children should be made aware of the dangers of carbon dioxide,” said Councillor Linda Blackburn at the Tree Planting event. “Eco Committees should look at the role of the tree in absorbing carbon dioxide and liberating, life-giving oxygen.”

Councillor Blackburn along with Cllrs David Acton, Mike Cornes and Dolores O’Sullivan, and members of the Green Party attended the tree-planting event, which was organised by the Breathe Clean Air Group.

BCAG Chairman Pete Kilvert said that trees and waste wood are to be burnt at biomass incinerators throughout the country to generate electricity. Ironically, burning wood produces more carbon dioxide than coal and if they are cut down, there will be fewer trees to absorb this greenhouse gas. The proposed Davyhulme incinerator will burn other waste as well; so airborne contamination will affect the health of local people.

Councillor Acton expressed support for BCAG for their continued determination to prevent the construction of the Davyhulme Incinerator. “Trafford Councillors are united in their opposition to this incinerator”, he said.

Mr Kilvert thanked everyone who attended, the Friends of Dayhulme Park and Mr Pete Brookes of Brookedge Nursery for donating the tree. 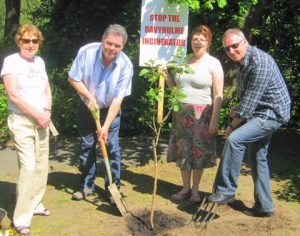 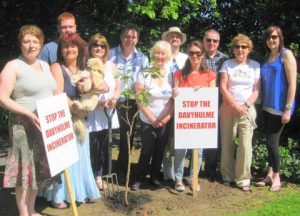