TRAFFORD PRIMARY SCHOOL IN TOP 10 MOST POLLUTED SCHOOLS IN ENGLAND

For nearly 2 years, the Breathe Clean Air Group has been sampling nitrogen dioxide concentrations at various locations in Urmston and Davyhulme. The aim is to have a baseline to see if the Davyhulme incinerator would add to this air pollution when it comes on stream in 2018. Some of the sampling points have been near the M60 motorway and others have been outside primary schools. BCAG have had their sampling tubes analysed by an independent laboratory and have been publishing their results. They have held discussions with Trafford Council’s Air Pollution officers and highlighted the plight of six schools alongside the motorway.

Nitrogen dioxide is a toxic and irritant gas caused by the combustion of carbon-based fuels. As the motorway and major roads are in an Air Quality Management Area there is a European safety limit of 40 micrograms per cubic metre. Trafford Council has declared an even stricter limit of 35. Results in Urmston and Davyhulme have been running in the 40s and 50s.

Peter Kilvert, Chair of BCAG said, “Now that the Sunday Times has highlighted a Trafford School as being in the top ten of most polluted schools in England, Trafford Council has got to take action to protect the pupils and staff of that school. The problem is mainly generated by the traffic exhaust along the motorway and main roads, but we believe that every industrial process that burns fuel and every additional vehicle these processes bring into our community is another nail in the coffin. We are genuinely concerned that the Davyhulme Incinerator and the Coal Bed Methane Fracking venture (passed by the Council last week), will add to the already too high level of air pollution. The children are our future. We don’t want that future to be riddled with hospital visits and early death.” 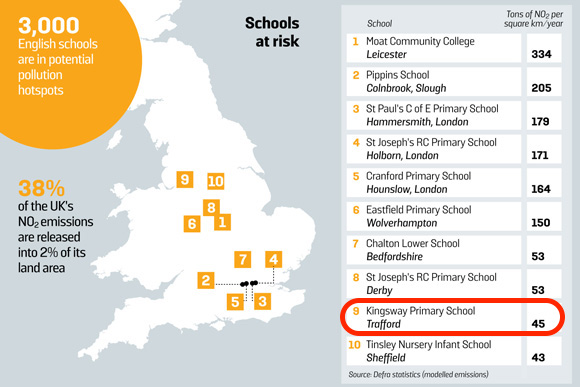