The Breathe Clean Air Group have featured in three local press articles this week. Â Following Peel Energy’s Consultation last week, Peel stated that there were, “strong levels of support,” for the plant and that, “80% of attendees who provided feedback said that they strongly agreed with the proposal.” Â However, on investigation of the figures used to determine these bold statements, it was found that this was based on the feedback from only 10 people. Â Given that we have paper and online petition signatures from 5000 people, Peel Energy appear to show a complete disregard of local opinions and instead, prefer more focused on trying to use ploys to sell the proposal to us. Â No thank you!

Also, the strengthening support from our local councillors has also been fantastic news. Â We are extremely pleased to hear they have evaluated the evidence and are supporting us. Â Many councillors are signing our petition too.

Read the articles to find out more! 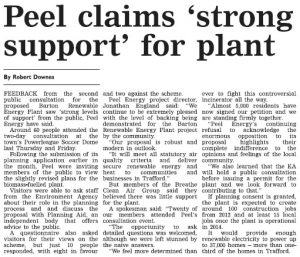