Burn Calories Not Waste, Walk to Save the Human Race

The Breathe Clean Air Groupâ€™s next big event will be a march on Saturday 1st October. This will coincide with â€œ2011 Global Day of Action Against Waste and Incinerationâ€. We had planned a demonstration type March along the streets of Urmston, but the police thought otherwise. Because of changes in legislation, the police are no longer obliged to provide cover for protest events. We held an emergency meeting and decided unanimously that to police it ourselves would be far too risky. Weâ€™ll have children on the march and we have no authority to close roads and re-direct traffic.

So, our Protest March will be along footpaths instead. The route will take us on a circular walk, making left-hand turns and not crossing over busy roads. We will assemble at Golden Hill Park(Park Road North) at10.30am for an11am set off. Weâ€™ll turn left onto Moorside Road to the Curzon, turn left along Princess Road, turn left along Flixton Road, turn left through Eden Square and on to Golden Hill Park. We plan to walk single file or in pairs and be considerate to other pedestrians.

There wonâ€™t be a Rally at the end of the march this time, but we are asking Councillors and would-be speakers to send us a few words of support, to be posted on a special page on our website.

We would love to see you on our march to protest against the controversial Davyhulme Incinerator. We would be very happy if you could make and bring along a banner or placard. It could be a few words of protest painted on a piece of cardboard. Weâ€™re hoping to get some balloons for the children to carry. If you can wear something red or black, that would be good too. It will be colourful, noisy and fun for all the family.

We hope to get our message across to the Council, the Government and to Peel Energy. Burning wood and waste produces fine particulate matter that has been linked to all kinds of diseases from asthma to cancer. We donâ€™t like biomass and we donâ€™t want an incinerator in Davyhulme. 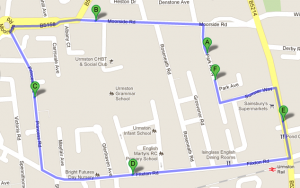